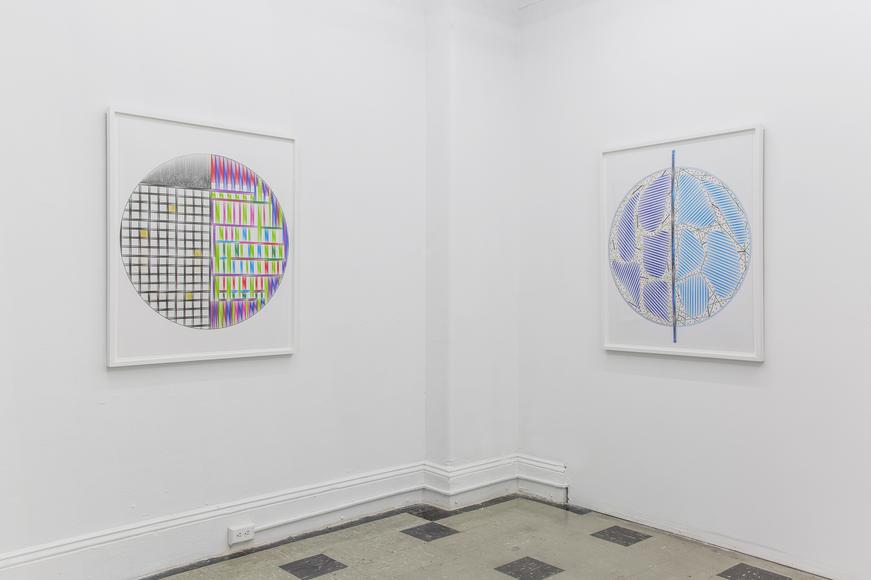 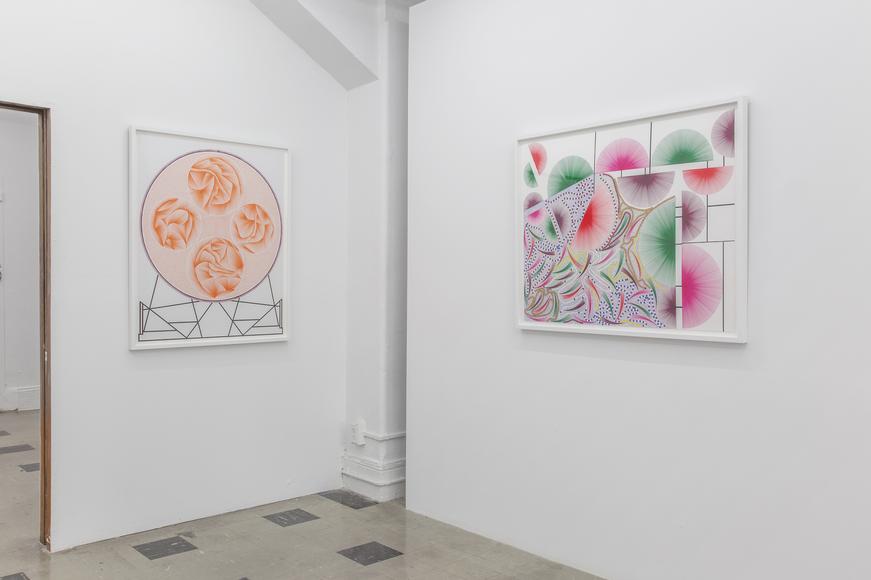 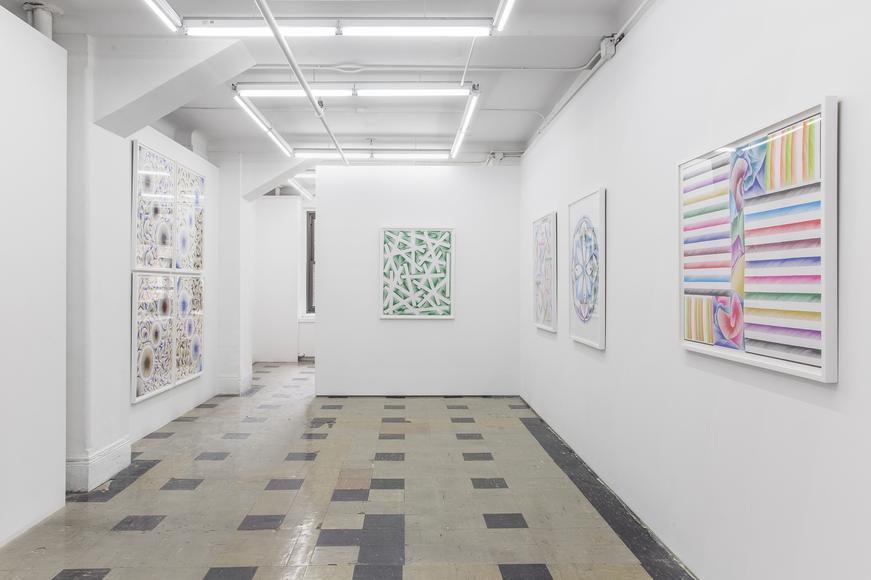 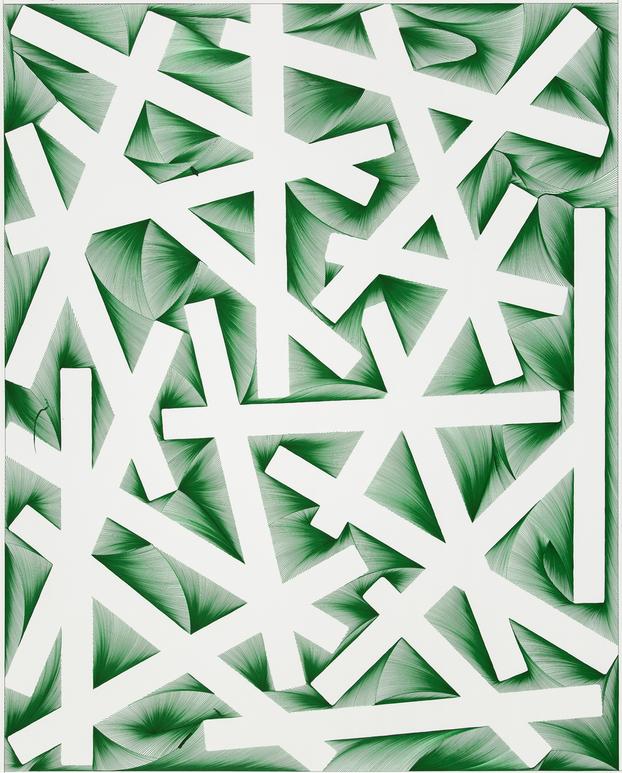 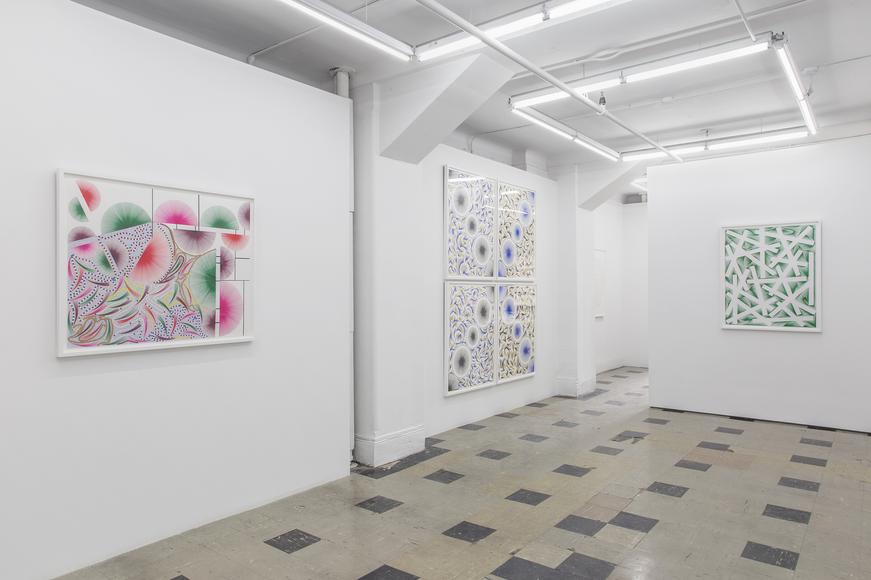 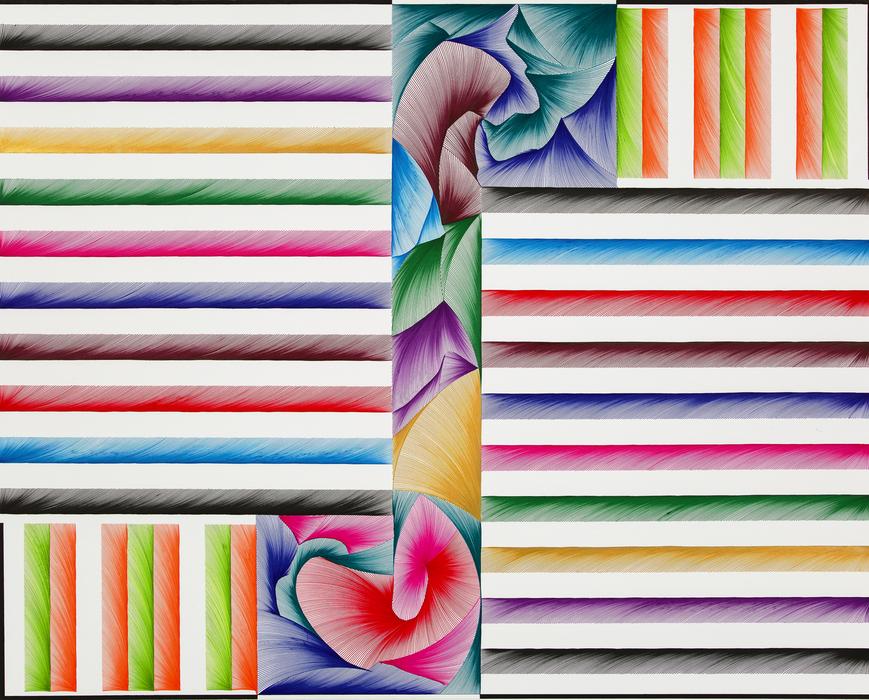 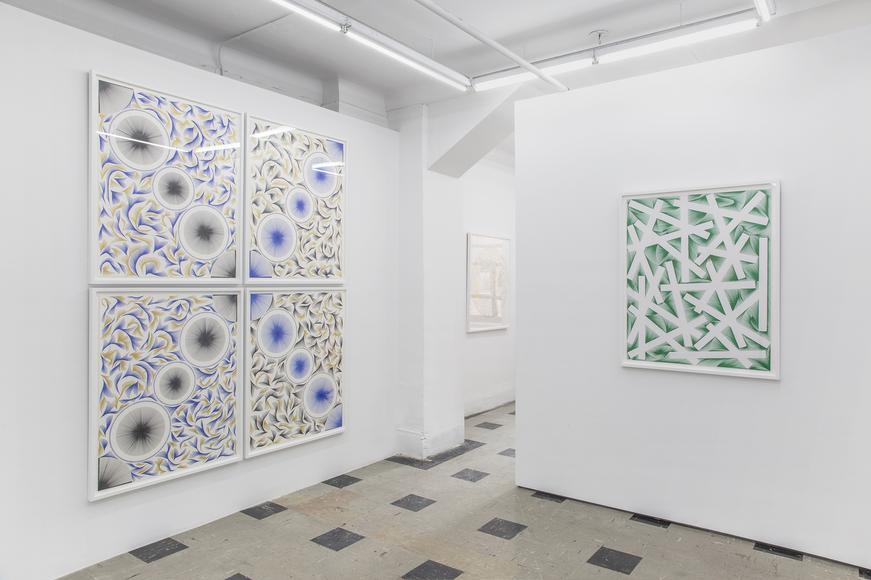 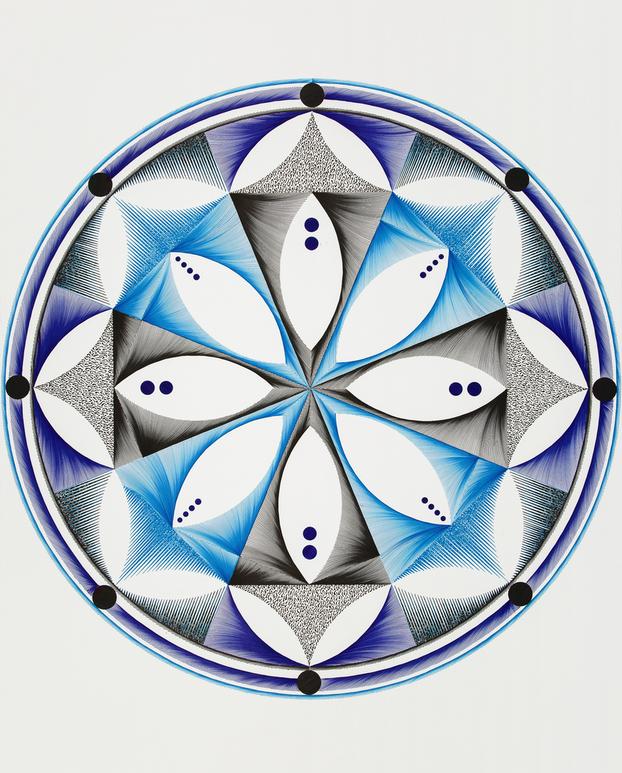 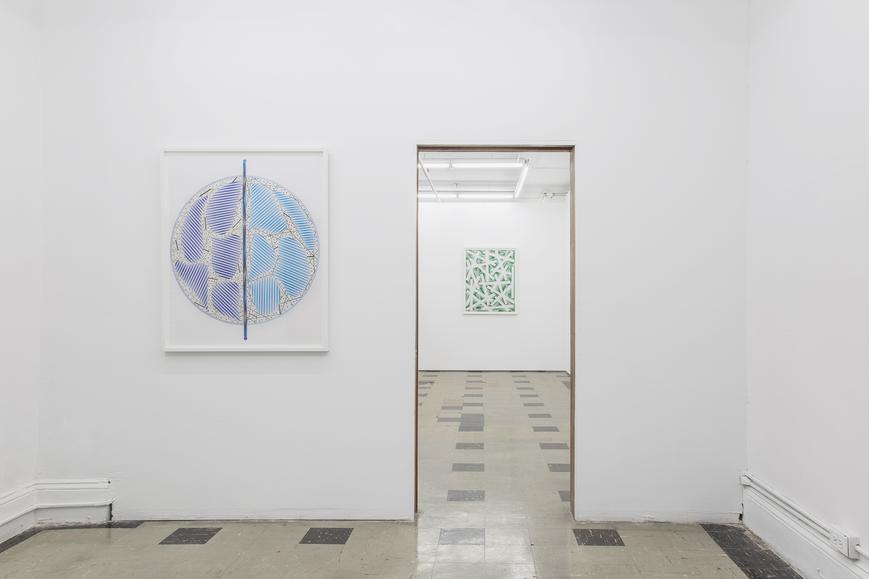 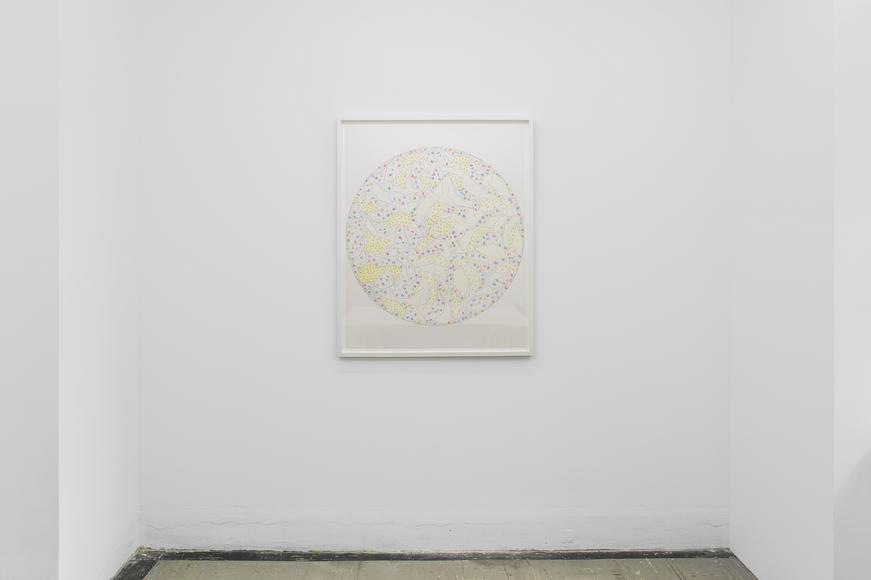 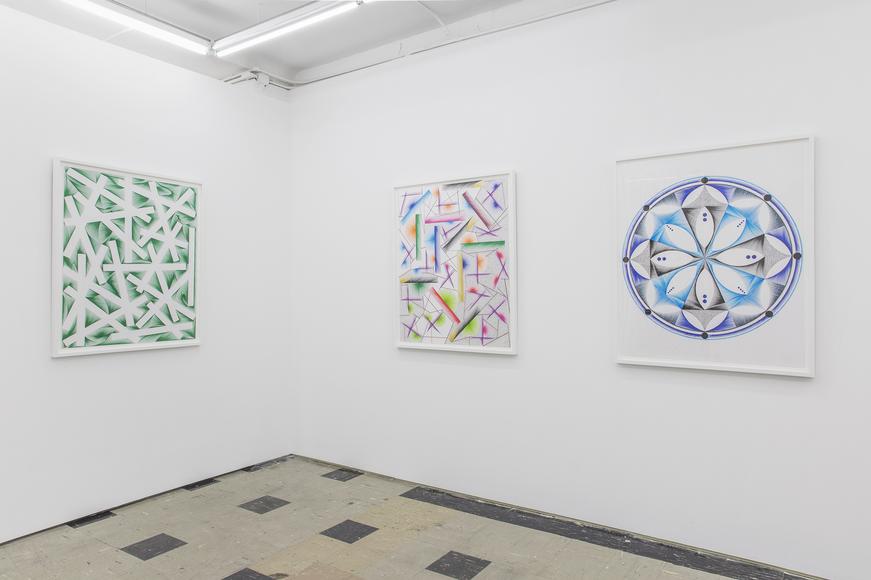 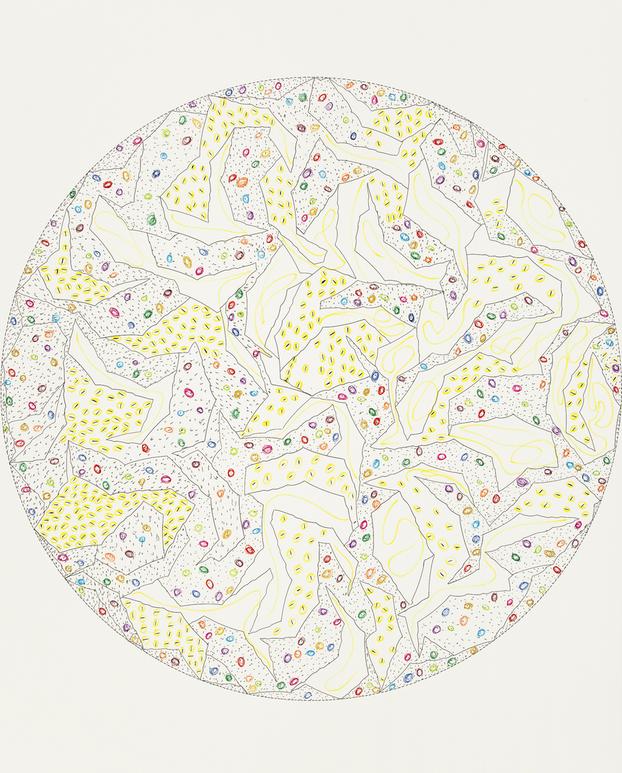 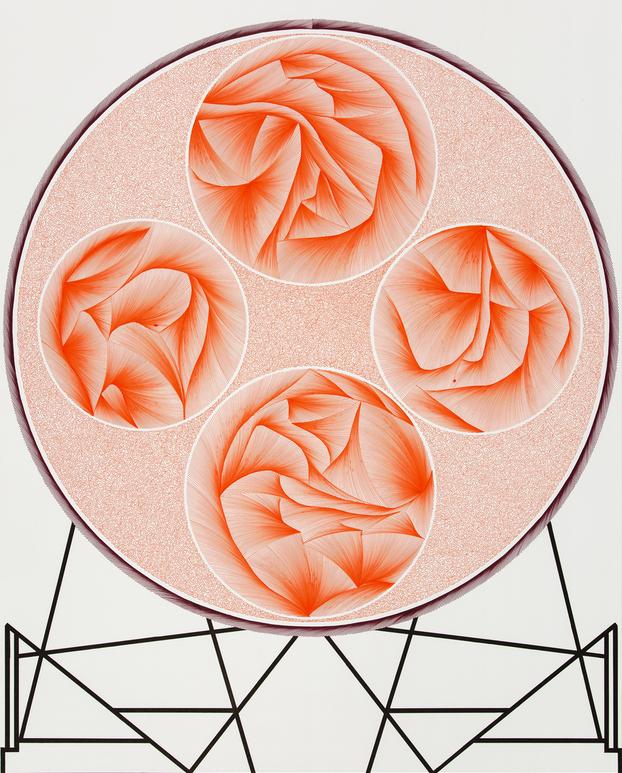 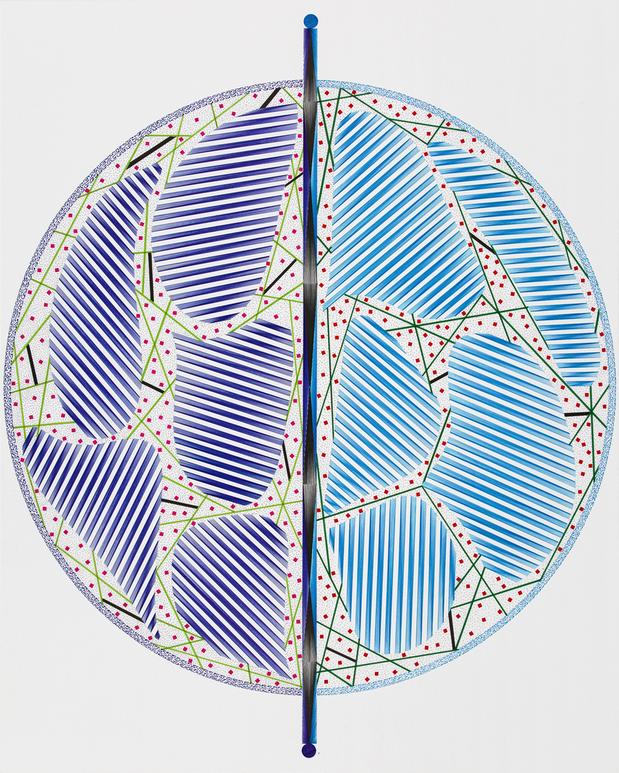 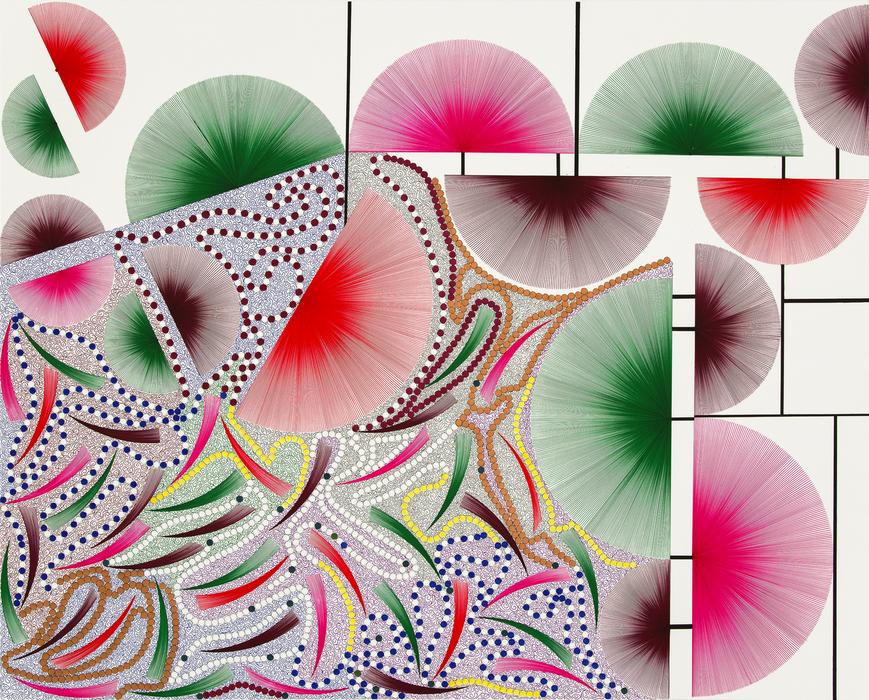 Gordon Robichaux is pleased to present our second exhibition of Sanou Oumar’s drawings following his 2018 debut and our solo presentation of his work at Frieze New York in 2019. His most recent solo exhibition was presented at Herald St in London in 2019. The exhibition features recent, large-scale drawings on paper board including a monumental four-part work. Working with a humble set of materials—pen and marker—Oumar creates mesmerizing compositions using his own distinct vocabulary of mark-making strategies and his seemingly infinite capacity for invention. Through his process, Oumar creates a space for transformation and healing.

Sanou Oumar’s intricate drawings reveal his interest in the dynamic forms and structures of architecture borne out of a real yet imaginative desire for home: roots, order, and infinite calm. As a young person growing up in Burkina Faso, Oumar would contemplate the elaborate simplicity of the modern bank building in Ouagadougou: “There was nothing missing. I could see all the lines in the building: rectangles, circles, triangles, everything included, each one following its own order.” His serialized, daily drawing practice echoes this pursuit of visual order, a process that helps him reframe and come to terms with the chaos of his past and present experience: the trauma and constraints of his childhood, and the physical and emotional displacement he faces as an asylum seeker in the U.S.

Oumar’s highly inventive works elevate quotidian materials—pen, marker, colored pencil, paper—while employing his personal possessions as stencils: his ID card, disposable spoons, washers, compass. The deftly made drawings immediately call to mind Indian mandalas, complex circular designs that represent imaginary palaces to contemplate during meditation. They also evoke the work of Hilma af Klint and Emma Kunz who used abstract geometric language to explore complex belief systems, spirituality, and mystical restorative practices. Like Kunz, the Swiss artist and healer, whose diagrammatic drawings held within them the secret to health and well-being for her patients, Oumar draws to commune with other worlds and dimensions, the act of which is by turns metaphysical, liberating, and restorative. “The reason I am alive is because of them.”

In their tessellated shapes, colors, and patterns exist endless stories and influences: pink round flourishes represent his late mother’s soft presence; spiderweb lines evoke the suspension cables of the Brooklyn Bridge; the use of color and repetition mimic the Vlisco textiles sold in Bobo’s outdoor markets, zellige techniques of Islamic tilework, the mud architecture and modernism of his beloved bank building. All these stories are imbued with a velocity and an urgency, as if passed down from generation to generation. Each drawing optically engages the viewer in a complex exploration of pattern, color, and form, promising the same gift they give their maker: an experience of order, relief, beauty, imagination, and transformation.


Sanou Oumar was born in Burkina Faso, West Africa, in 1986; he lives in the Bronx and works in Harlem, New York. He graduated from the University of Ouagadougou in 2007 with a major in English literature. In 2015, Oumar moved to the United States to seek asylum. He is represented by Gordon Robichaux in New York where he had his first two-person exhibition (with Matt Paweski) in 2018, and Herald St in London where he presented his first solo exhibition in 2019. His work has been included in numerous group shows: a two-person exhibition (with Elisabeth Kley) at South Willard (organized by Matt Connors); at the Minneapolis Institute of Art, where his work is held in the permanent collection; Karma, New York; Parker Gallery, Los Angeles; Herald St, London; Maroncelli 12, Milan, Italy (organized by Matt Paweski and Jacopo Mazzetti); Gordon Robichaux in A Page from My Intimate Journal (Part I) —; at Mormor Studio, New York, in Art and Resistance, (organized by the Center for Constitutional Rights); and at Joost van den Bergh, London, in A Concentration of Power. His art has been celebrated by The New Yorker on two occasions, and a book of Oumar’s drawings (published by Pre-Echo Press with an essay by Matt Paweski) was released in December 2018 at Karma Bookstore in New York. Most recently, a profile on his work was included in Vitamin D3: Today’s Best in Contemporary Drawing published by Phaidon in 2021. 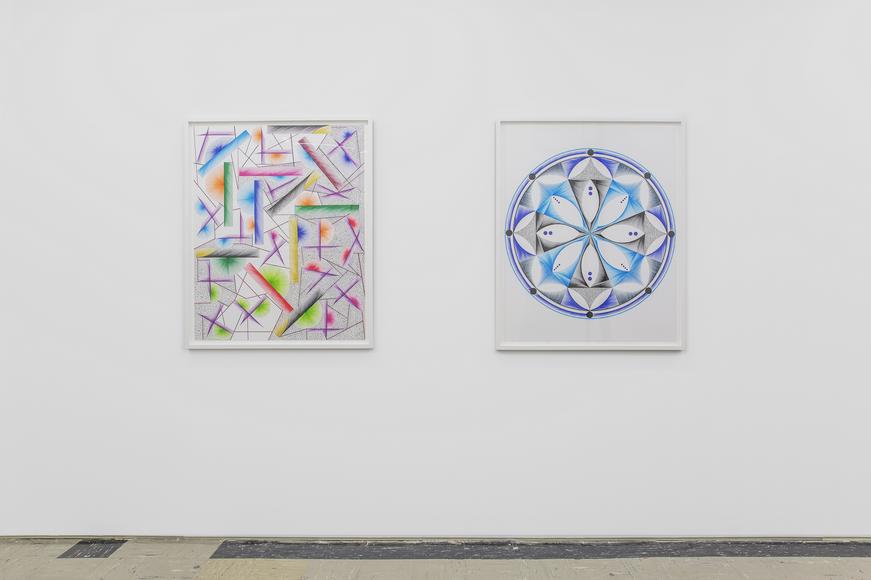 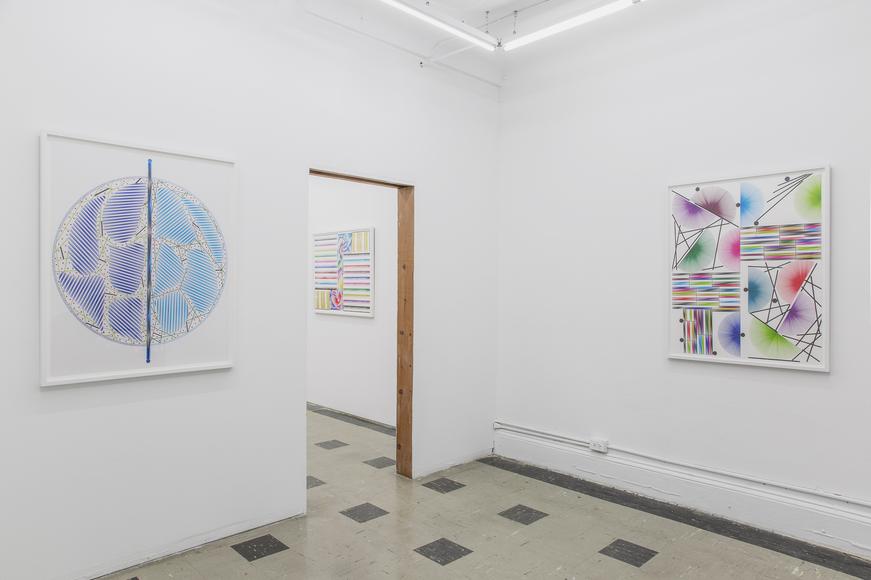 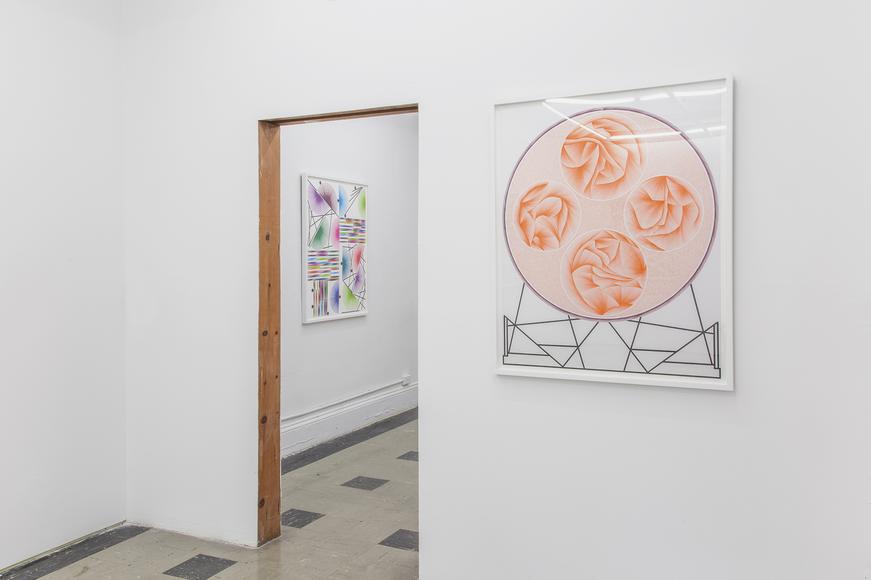 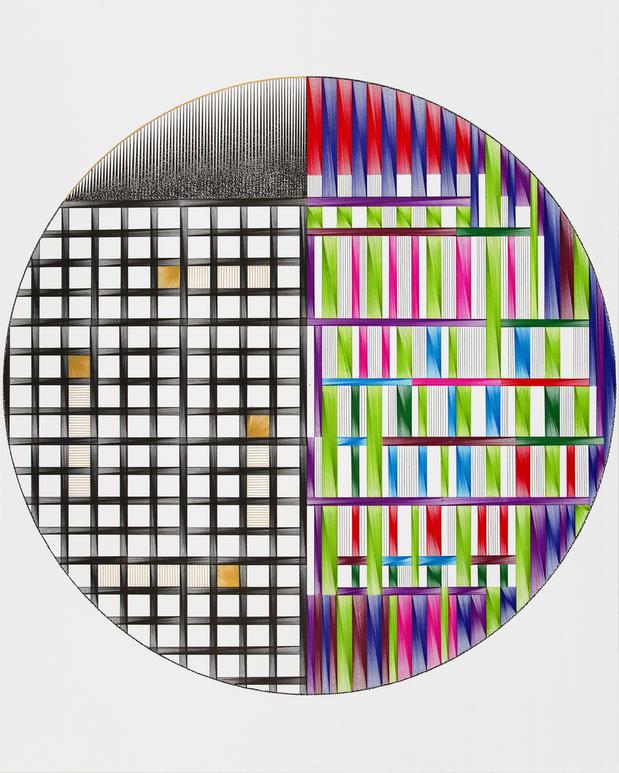 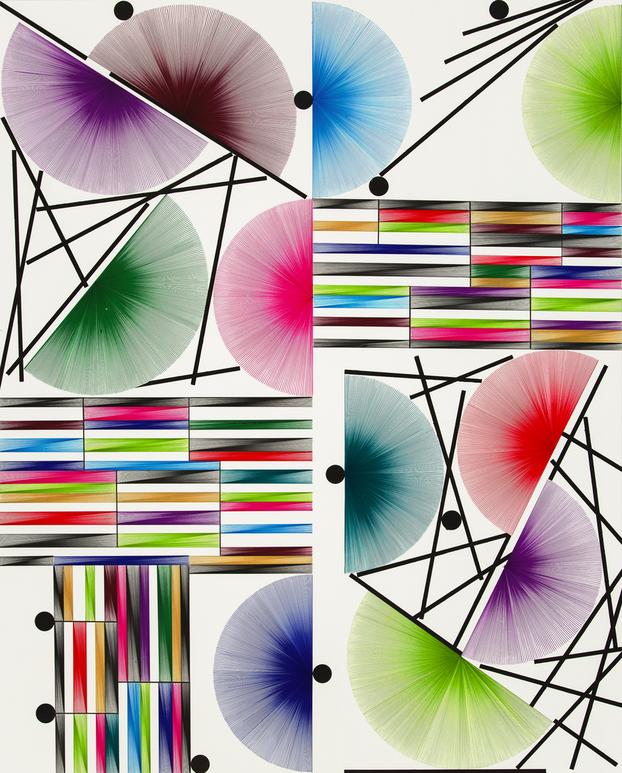 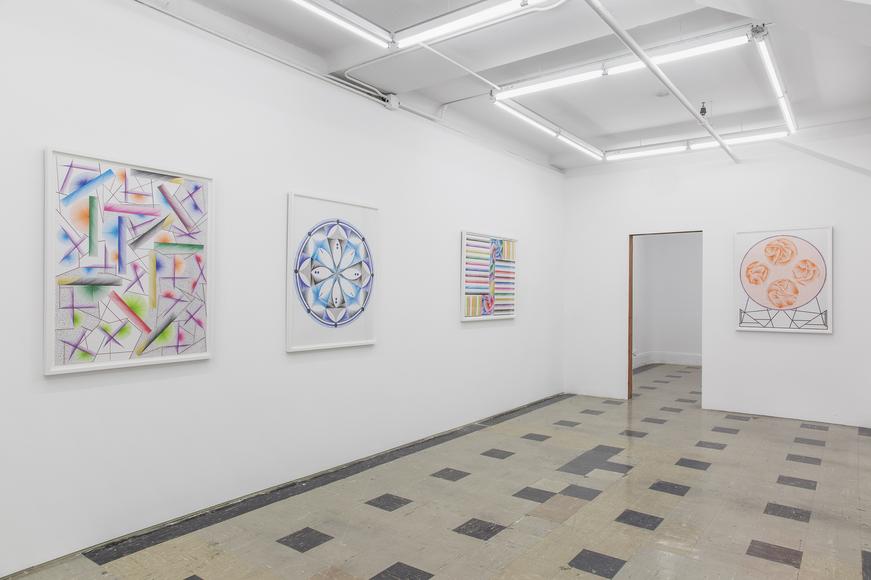 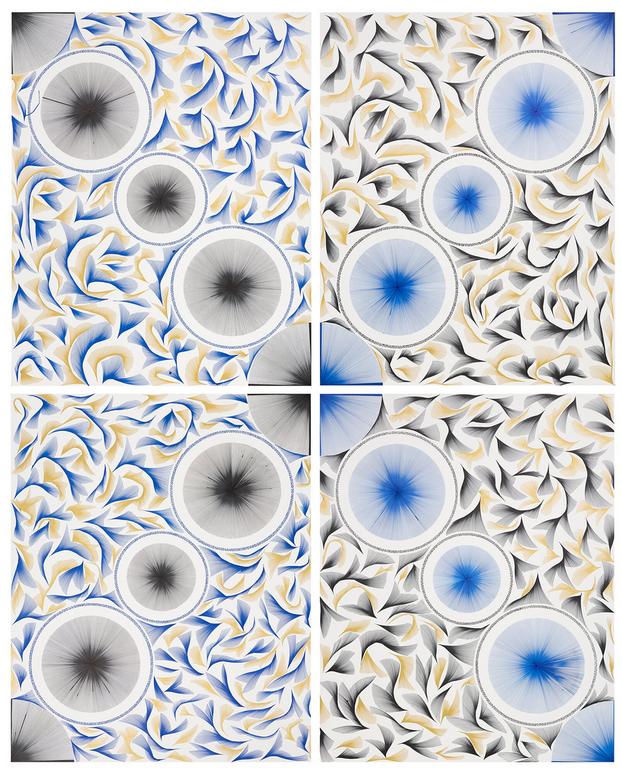 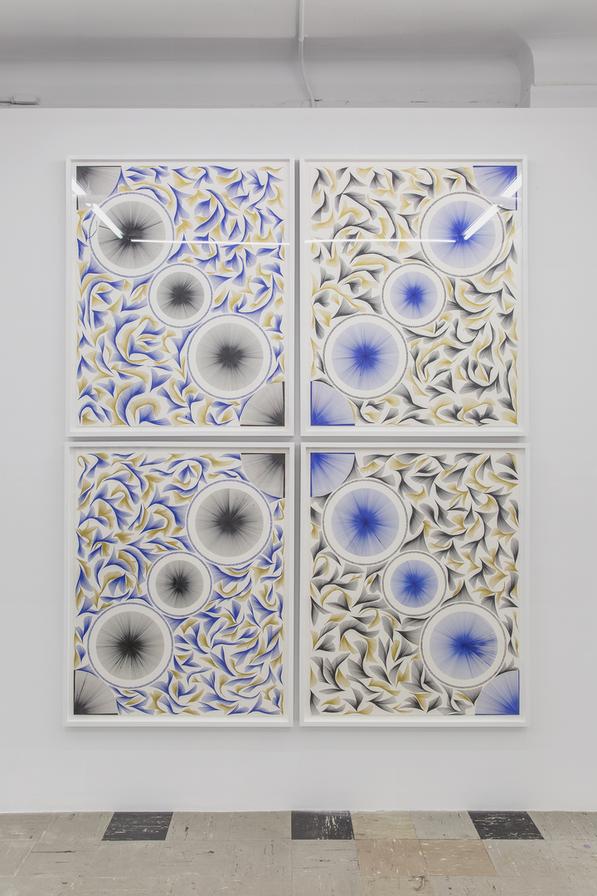 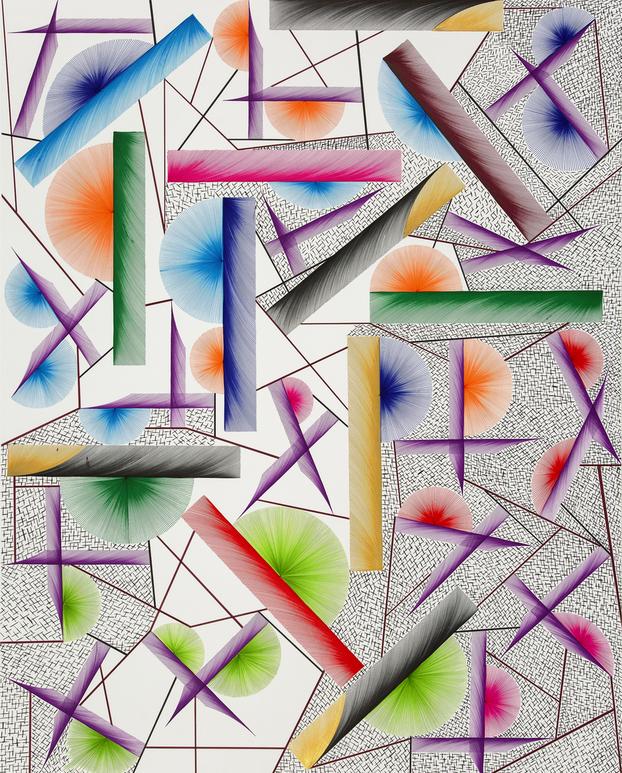 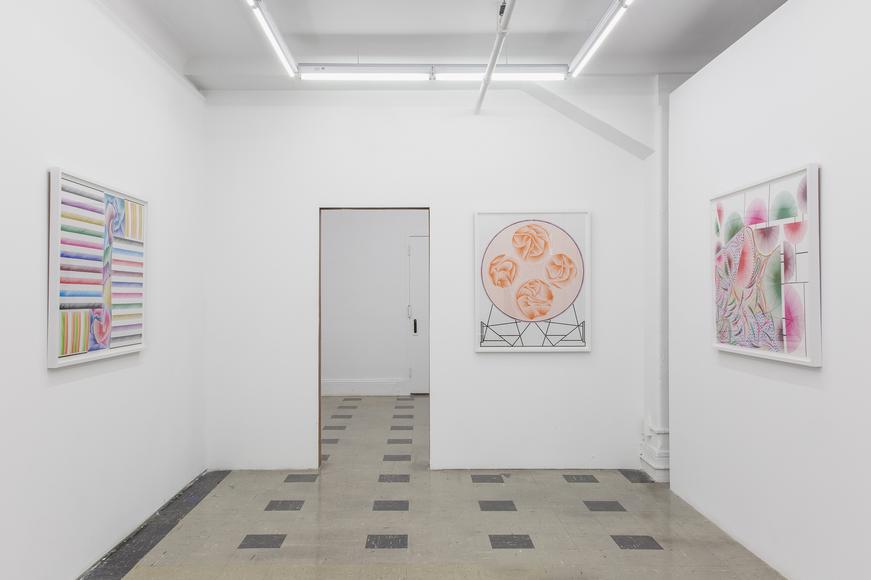