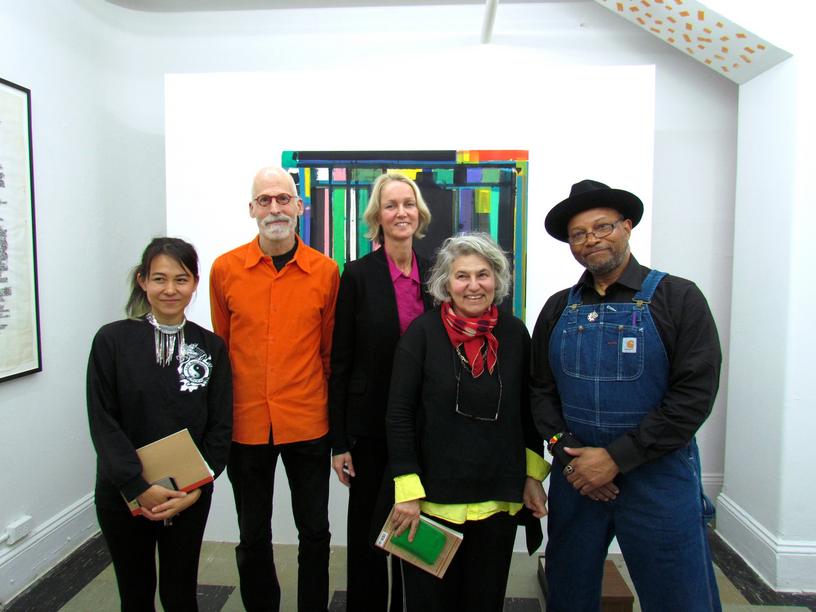 Amy Sillman
So Be (Solveig Fernlund and B. Wurtz)
Amy Yao

Amy Sillman is an American painter born in Detroit, Michigan and living in New York. Her artistic practice includes drawings, cartoons, collage, iPhone video, and zines. Since 2015 she has worked at Städelschule in Frankfurt am Main as a professor of painting. Sillman is Co-chair of Painting at the Milton Avery Graduate School of the Arts at Bard College. Sillman’s paintings are in the permanent collections of the Museum of Fine Arts in Boston, the Art Institute of Chicago, Museum of Modern Art, Whitney Museum of American Art in New York, the Brooklyn Museum, the Baltimore Museum of Art. Sillman was awarded a National Endowment for the Arts fellowship in painting, the Elaine de Kooning Memorial Fellowship, a Guggenheim Fellowship, and fellowships from the Pollock-Krasner Foundation and the Joan Mitchell Foundation, and has participated in the American Academy in Rome Residency.

So Be (Solveig Fernlund and B. Wurtz) is a musical collaboration between an architect and an artist.

Solveig Fernlund, a native of Sweden, has been practicing architecture in New York since 1992, building projects both residential and commercial. Her practice includes teaching, drawing, sewing, singing and writing music. Erasing the distinction between these fields allows Fernlund an expanded vocabulary. Commercial projects include: Ted Muehling Store, NY; Maharan Offices and Showroom, NY; and the Nordic Watercolor Museum, Sweden.

B. Wurtz was born in Pasadena, California, and lives and works in New York. American artist B. Wurtz is best known for his carefully assembled sculptures and installations made of a wide range of commonplace, discarded materials. In 2015 he was the subject of a retrospective exhibition at BALTIC Centre for Contemporary Art, Gateshead, United Kingdom. In 2016 the exhibition traveled to La Casa Encendida, Madrid. He has had solo exhibitions at Metro Pictures, NY; Feature Inc., NY; Kunstverein Freiburg; White Flag Projects, St. Louis; and Gallery 400, University of Illinois in Chicago. His work has been included in group exhibitions at MoMA PS1, New York; Museum of Contemporary Art, Chicago; and Musée d’Art Contemporain de Lyon.

Otis Houston Jr. (born 1954, Greenville, SC) lives and works in East Harlem, New York. Houston Jr. is a self-taught artist who began making art after taking an art class while incarcerated. Since 1997, he has maintained an ongoing presence under the Triborough Bridge on the FDR Drive where he presents impromptu performances and a site-specific installation of signage and sculptures. Houston has exhibited his work at Gordon Robichaux, Room East, Socrates Sculpture Park (curated by Chelsea Spengemann) and CANADA in New York and at Cave in Detroit (in collaboration with Miles Huston). Profiles of the artist have appeared in ARTnews, The New Yorker, The New York Times, Gradient, and Contemporary Art Daily. Images and videos of his work taken by daily commuters and passersby populate numerous blogs and YouTube. Houston's album of original songs, America, was released in 2006 on iTunes. BLACK CHEROKEE, a twenty-two minute documentary directed by Sam Cullman and Benjamin Rosen, was released in 2012.