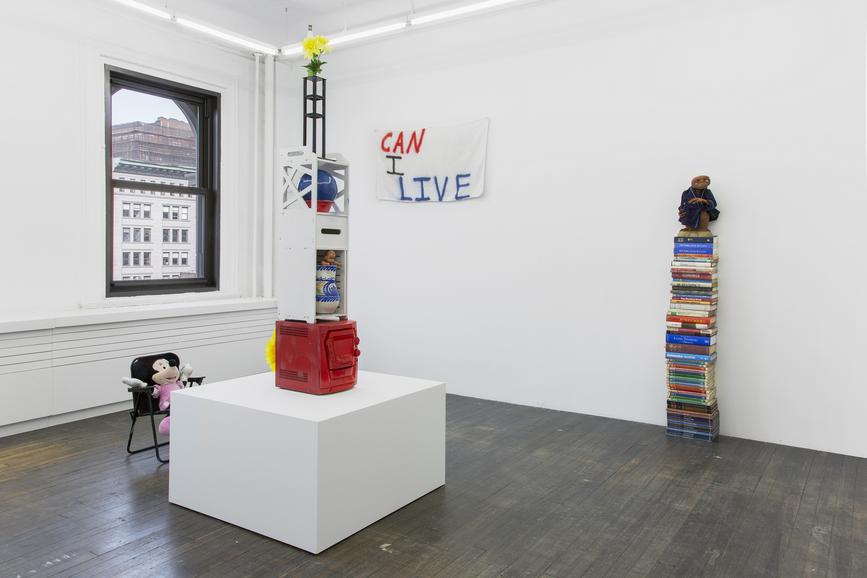 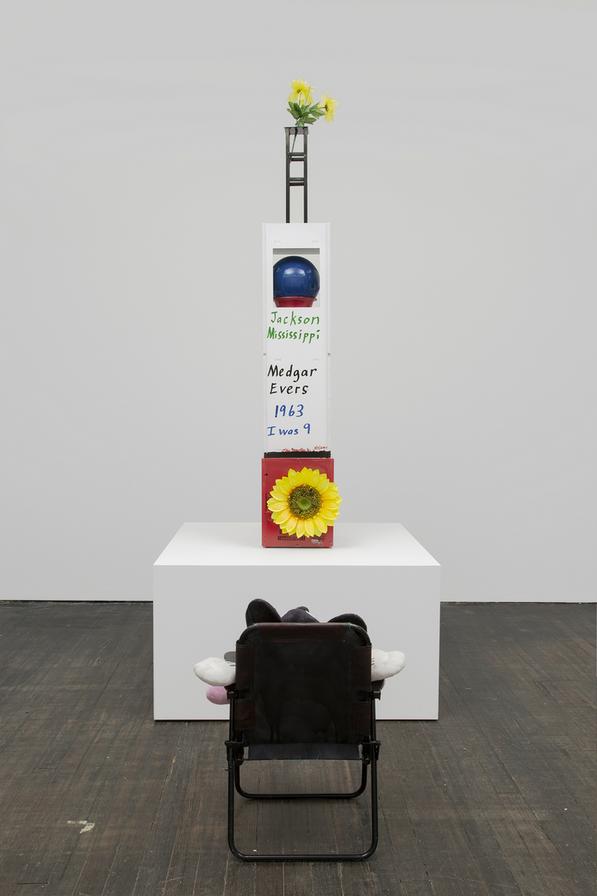 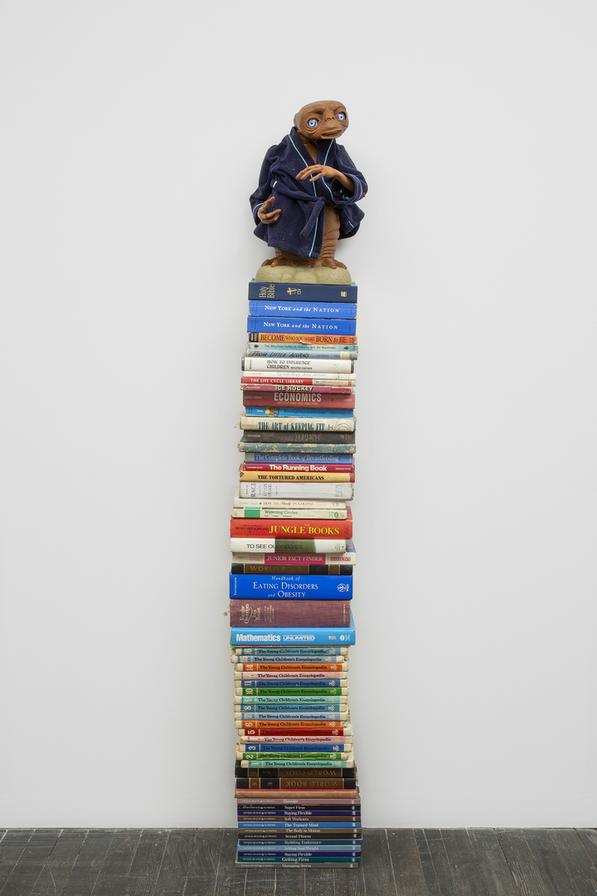 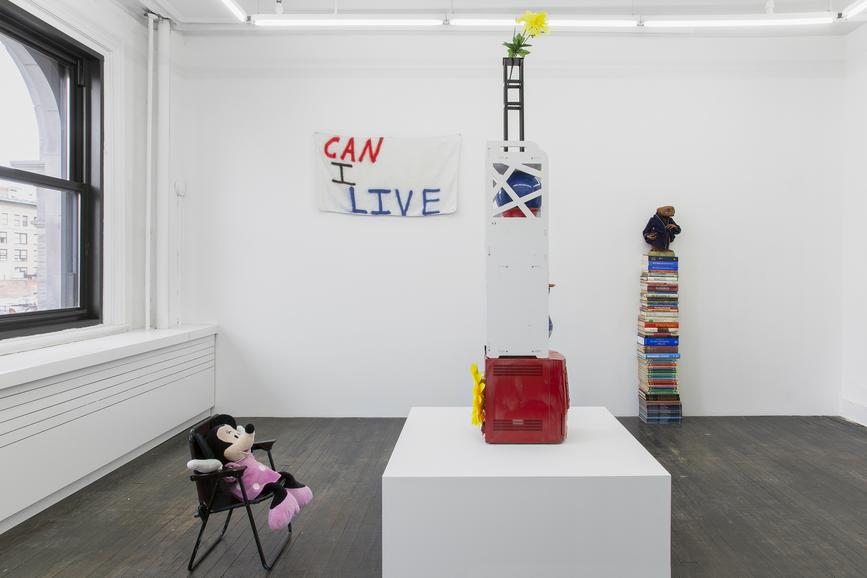 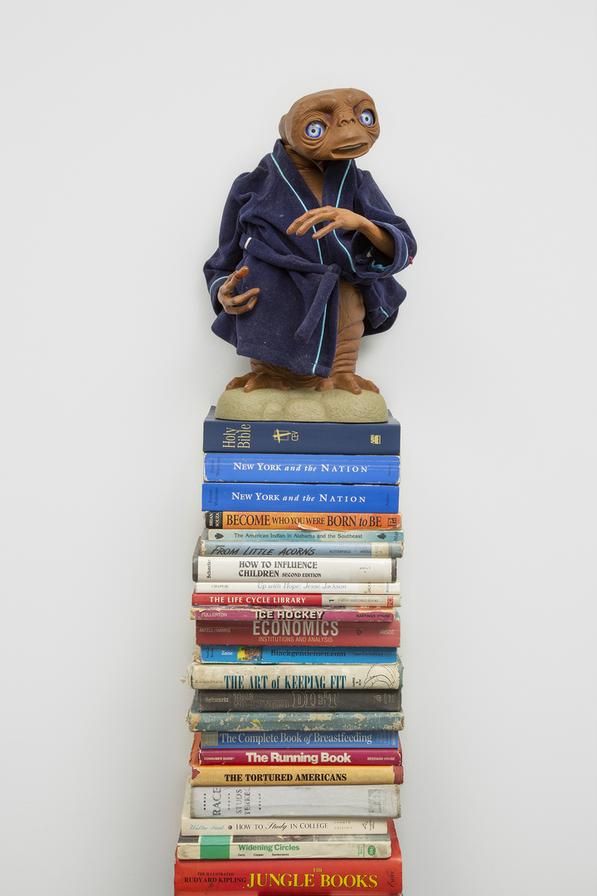 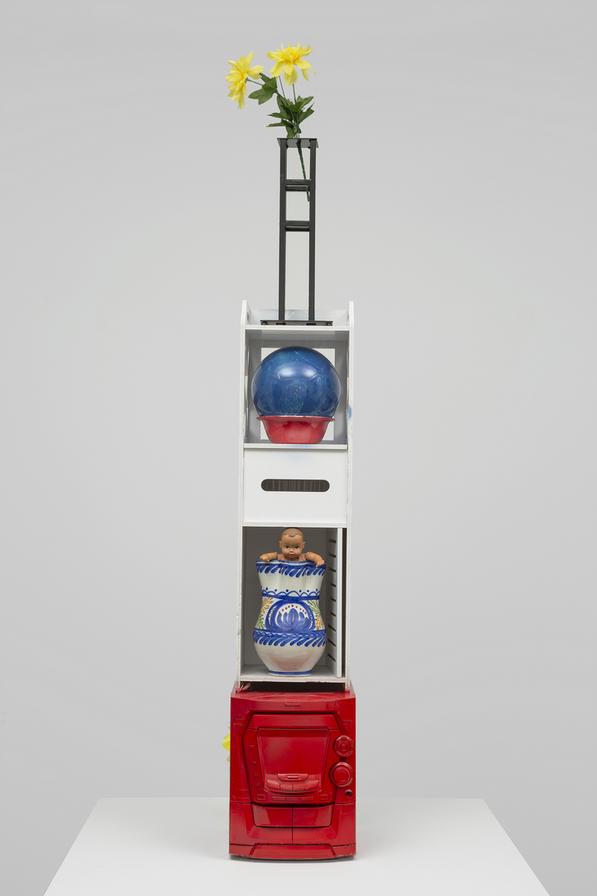 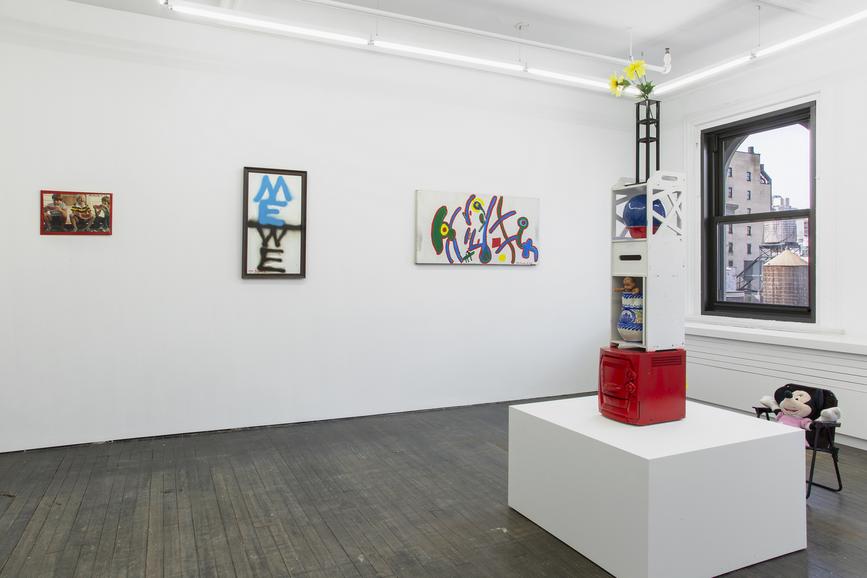 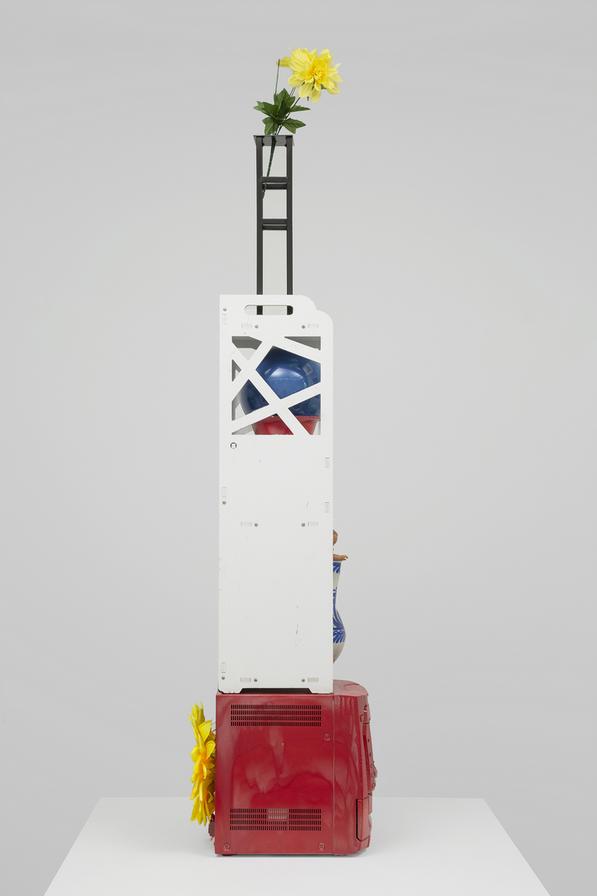 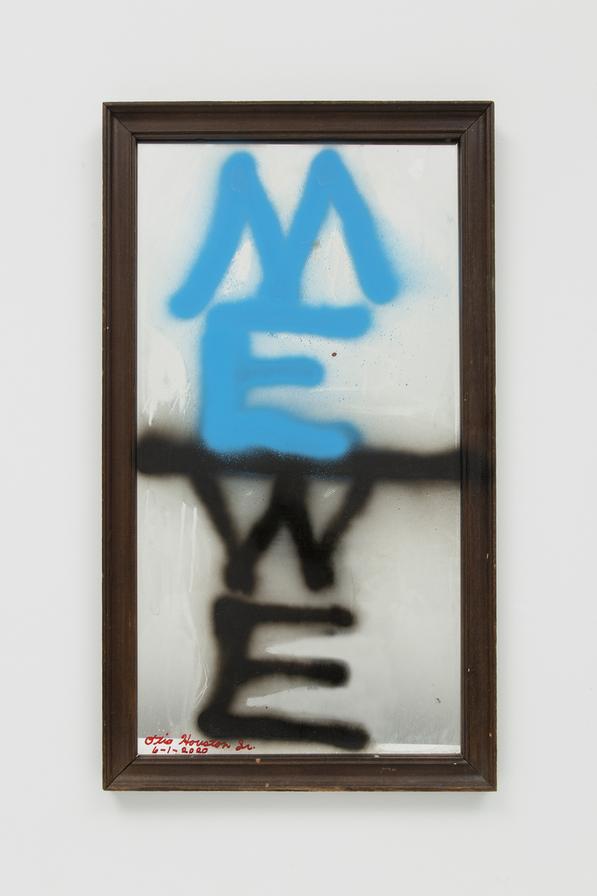 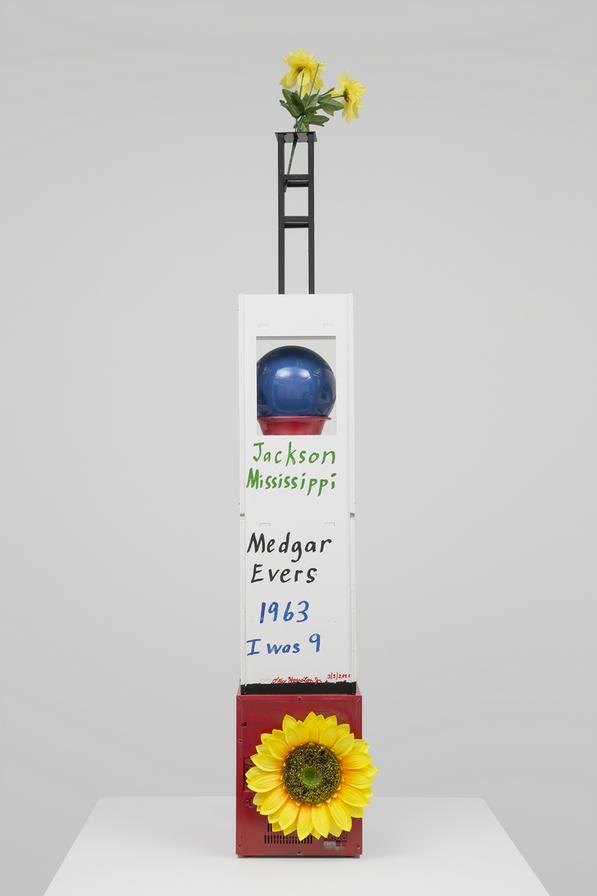 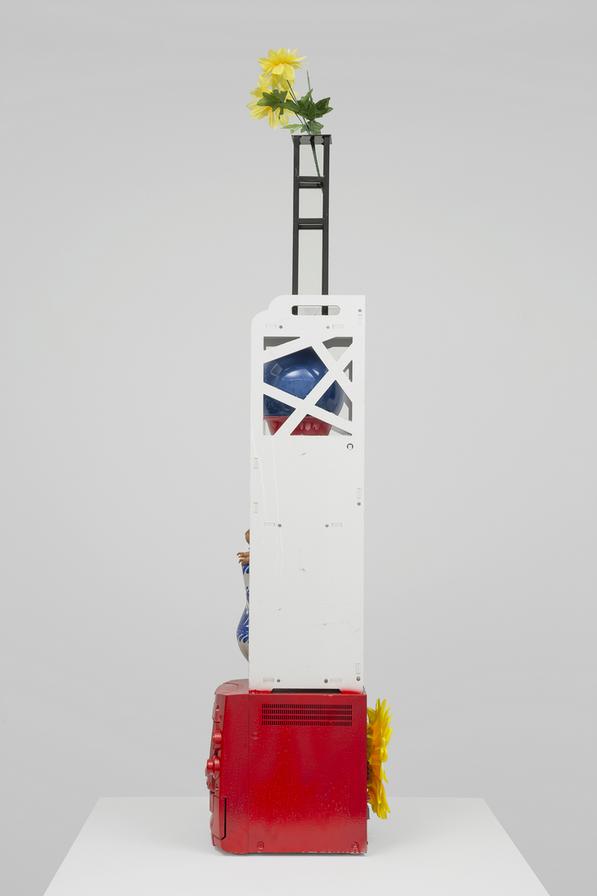 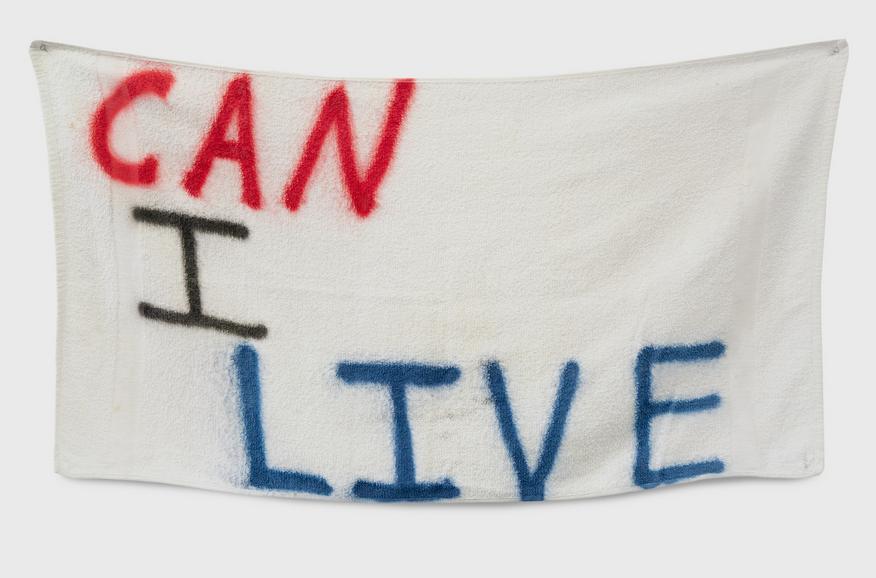 Gordon Robichaux is pleased to present our second exhibition of Otis Houston Jr.’s multifaceted work. The installation includes recent sculptures and paintings that exemplify his deft use of found and altered objects to address social and political concerns. In the center of the room, a sculpture made with an inverted stereo component—painted candy apple red—is topped with a vertical stack of repurposed furniture and objects—a white laminate side table, plastic baby doll, metal bowl, ceramic vase, blue rubber ball—and crowned with a flourish of artificial yellow flowers. Behind its pedestal, a Minnie Mouse plush toy seated in a child’s lawn chair looks up towards a text Houston Jr. inscribed in marker on the back of the tower-cum-memorial: “Jackson Mississippi / Medgar Evers / 1963 / I was 9”.

Pinned to one of the gallery’s walls is a bath towel the artist has spray-painted with a poignant concrete poem:

Another work quotes Muhammad Ali’s “ME. WE.”—an economical poem that he spontaneously delivered during a Harvard commencement address at the request of a student. Spray-painted onto a mirror he found on the street, Houston Jr.’s reflexive word-object invokes Ali to point us to the power of history and collectivity.

Nearby, a carefully composed stack of books (a series on fitness, health, and nutrition; a set of children’s encyclopedias; a book titled To See Ourselves; volumes on Jesse Jackson, Native Americans, breastfeeding; and a Holy Bible) is a biographical tower of enlightenment with a large plastic figure of E.T. at its apex. On the facing wall, Houston Jr’s abstract painting on a found canvas is the self-taught artist’s own treatise on the liberating power of self-realization through artmaking: “When you make something, it’s an acceleration; it’s spiritual and comes out of a feeling. Colors that come into my mind, my creativity, and what I come up with.”

The works of Otis Houston Jr., aka “Black Cherokee,” are primarily made with discarded objects he collects from the street and the dumpster at his job. Created in his Harlem apartment in the Taino Towers housing project, where he’s lived for the past thirty years, and in the basement of the office building where he works in Midtown Manhattan, these
artworks are informed by his perennial practice: an ongoing site-specific installation where he performs on the side of the FDR Drive. Over the years, he has come to occupy and claim this marginalized stretch of highway as gallery, studio, and forum. Since 1997, following a period of incarceration and his mother’s death, Houston Jr. has returned weekly to his self-anointed soapbox under the Triborough Bridge, where he stages impromptu performances and displays an arrangement of signage, drawings, and found-object assemblages that critique racism, poverty, and addiction, and celebrate health, education, happiness, and freedom. As he says, “We not in the same boat, but we all in the water.”

Like Houston Jr.’s persistent return to his spot on the highway, his declarative banners and anthropogenic sculptures insist on presence and liberation, actively working against erasure, inertia, and silence as well as frequent harassment by the police: “Where performance art goes from here is only a matter of imagination. In other words, there are no foreseeable boundaries for performance art.” The drawn text on his placards, banners, and found paintings are playful and pointed epigrams, concrete poetry, and activist calls distilling social issues into word-forms and text-shapes that ever-shift with meaning, visual power, art, and politics. His works made with found objects stand in for the body, referring back to his use of his own physicality in the highway performances. They also emphasize Houston Jr.’s democratic approach to artmaking: his use of direct address, discarded objects, fruits and vegetables from his fridge, paperbacks from his personal library, flowers from the corner store, all of it an insistence that the artist “use what he’s got.” Quoting Malcolm X when speaking about how and why he makes art, he explains: “All of our experiences fuse into our personality. Everything that ever happened to us is an ingredient.

Otis Houston Jr. (born 1954, Greenville, SC) lives and works in East Harlem, New York. Houston Jr. is a self-taught artist who began making art after taking an art class while incarcerated. Since 1997, he has maintained an ongoing presence under the Triborough Bridge on the FDR Drive where he presents impromptu performances and a site-specific installation of signage and sculptures. Houston has exhibited his work at Gordon Robichaux, apexart (organized by Sam Gordon), Room East, Socrates Sculpture Park (curated by Chelsea Spengemann), and CANADA in New York; Marc Selwyn Fine Art and Parker Gallery in Los Angeles; F in Houston (organized by Adam Marnie); Rebecca Camacho Presents in San Francisco (organized by Bob Linder); and Cave in Detroit (in collaboration with Miles Huston). Profiles of the artist have appeared in Hauser & Wirth’s Ursula magazine, The New Yorker, The New York Times, Gradient, and Contemporary Art Daily. Images and videos of his work taken by daily commuters and passersby populate numerous blogs and YouTube. Houston's album of original songs, America, was released in 2006 on iTunes and as a vinyl record in 2020 published by musician and artist Dean Spunt’s Post-Present Medium label. BLACK CHEROKEE, a 22-minute documentary about Houston Jr., directed by Sam Cullman and Benjamin Rosen, was released in 2012. 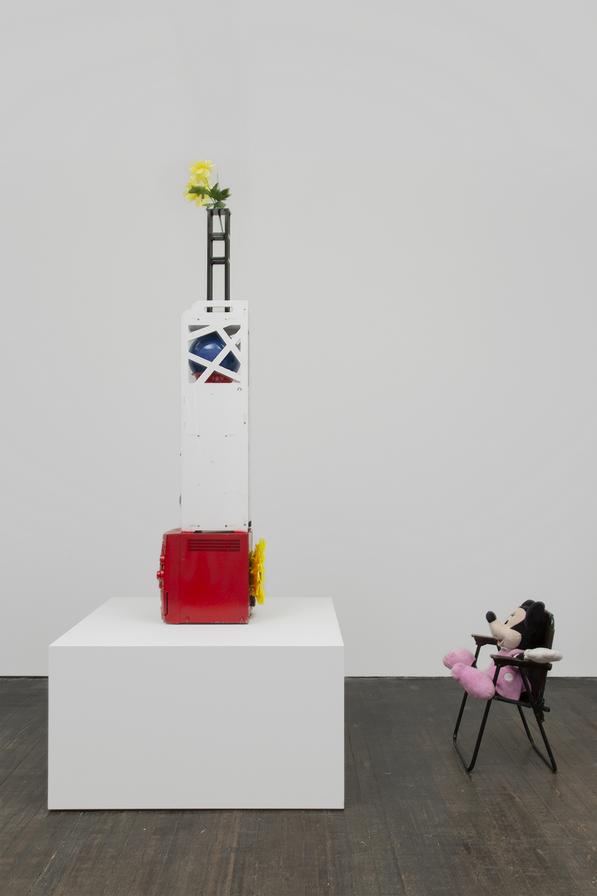 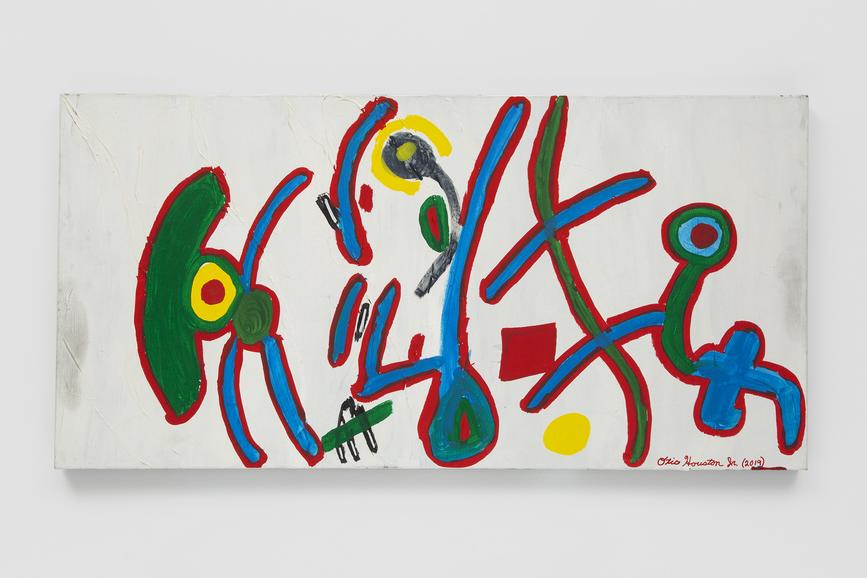 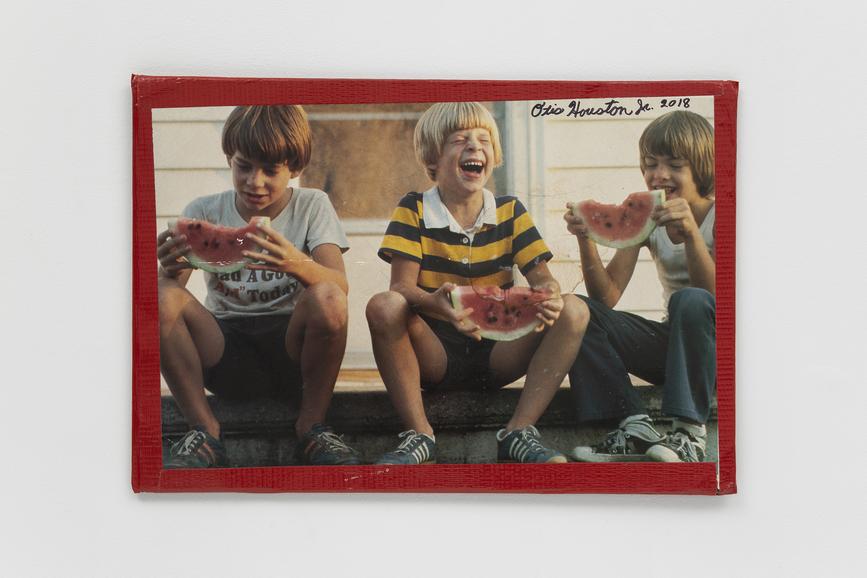 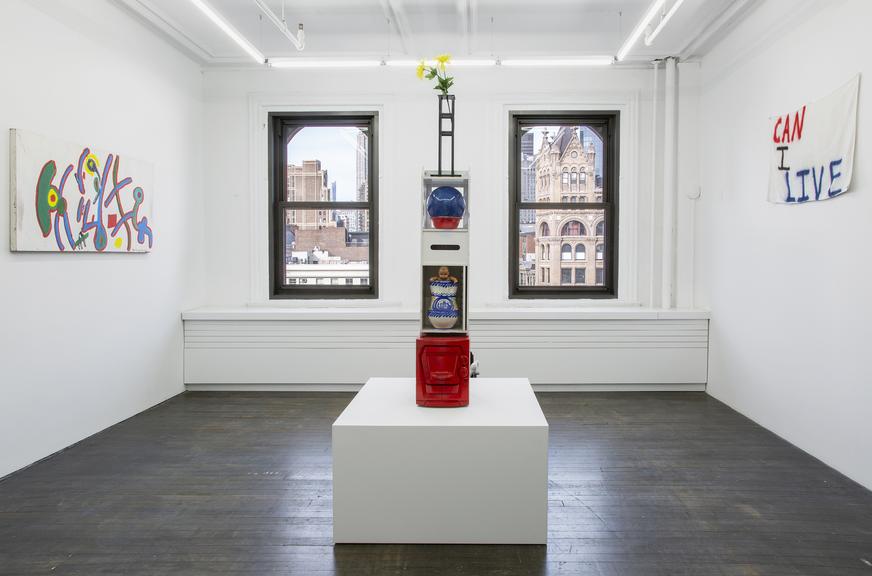