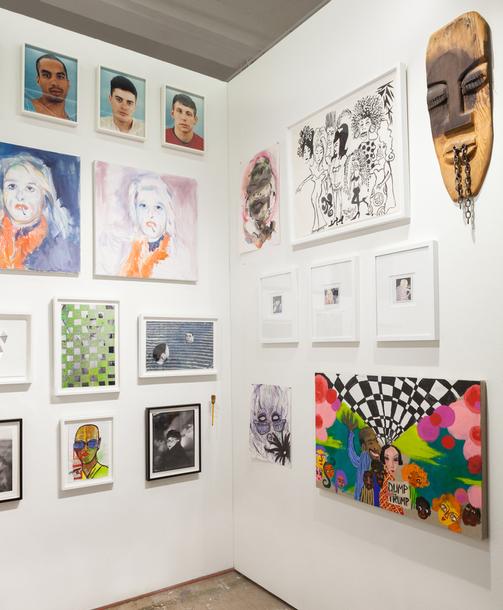 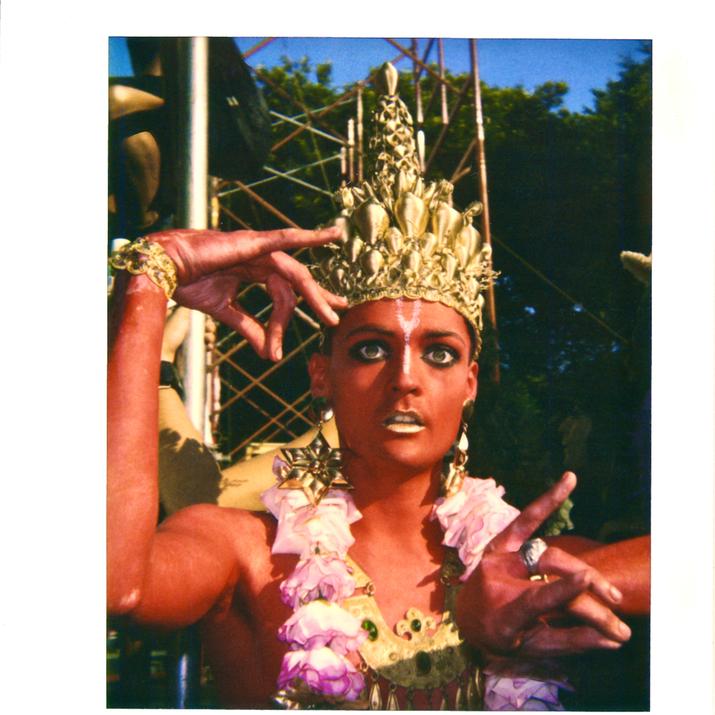 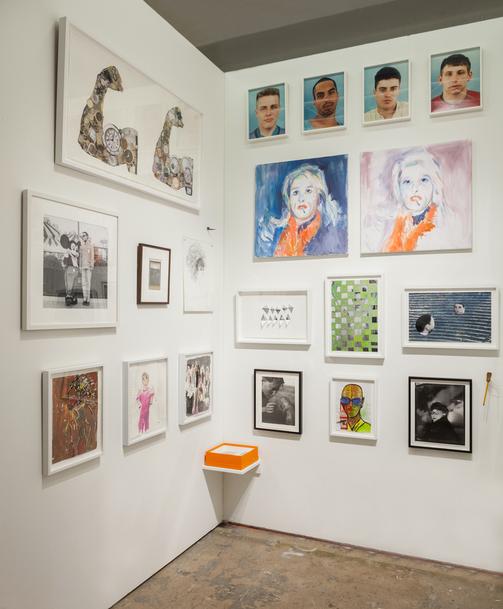 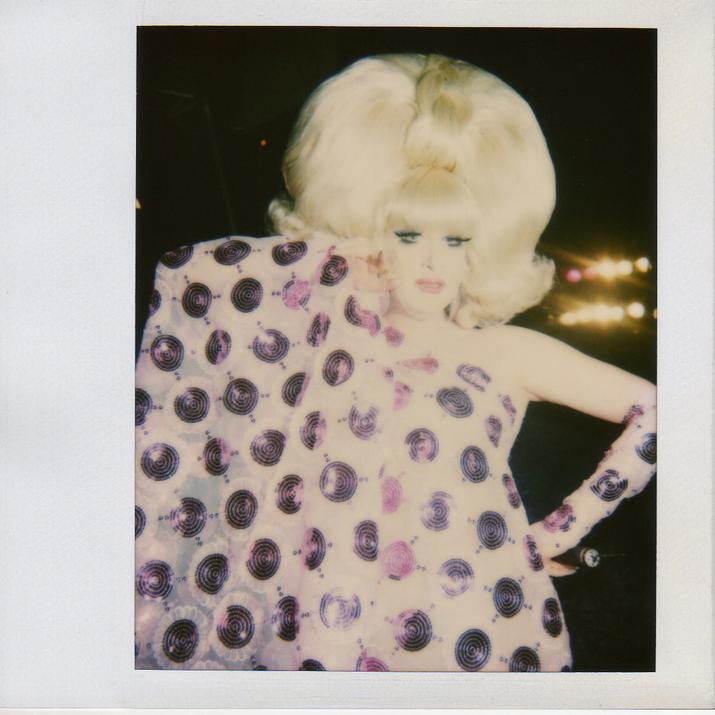 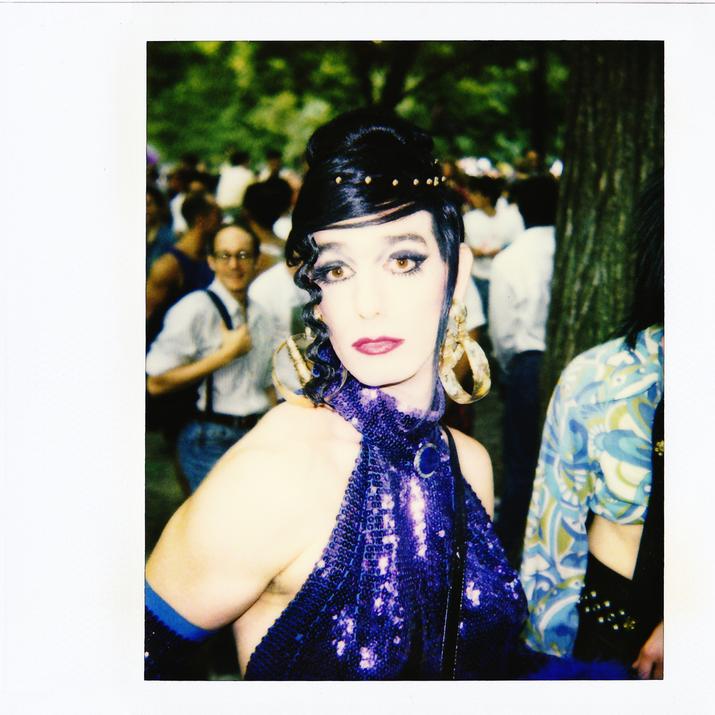 Let Go or Be Dragged explores the visual, conceptual, and political language of drag, bringing together an idiosyncratic group of emerging, established, and outsider intergenerational artists working in a range of media and disciplines: photography, drawing, painting, and sculpture.

These artists use diverse strategies and gestures—playful, irreverent, poetic, or earnest—to challenge binary and hierarchical conventions of identity. Our salon-style installation juxtaposes artworks to provoke unexpected relationships. The artworks and their subjects offer themselves up to the viewer seductively, satirically, in defiance—reclaiming power in the process.

In conjunction with this presentation, Gordon Robichaux curated Contemporary Drag for NADA Presents. The program includes performances, video screenings in collaboration with Electronic Arts Intermix (EAI), panel discussions, curated books with Peradam press, and a special collection of artist collaborations with Print All Over Me for NADA X PAOM. 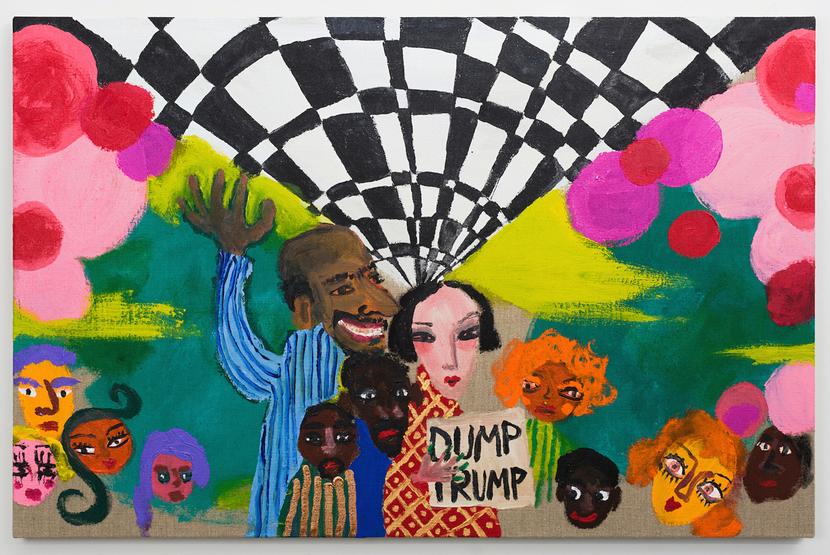 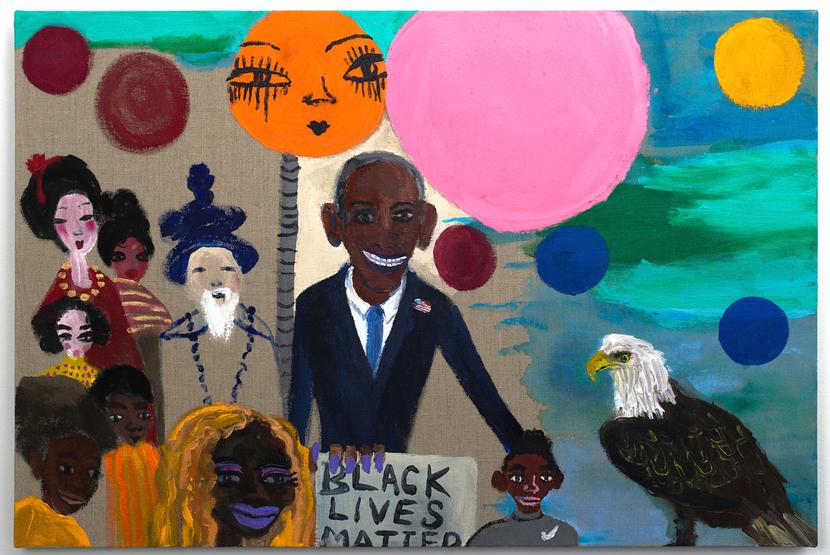 Babirye Leilah is an artist and activist currently seeking asylum from the atmosphere of LGBT discrimination upheld by the 2009 Anti-Homosexuality Bill in her native Uganda. Her interdisciplinary practice involves sculpture, photography, painting, activist projects, and community workshops that use art to foster dialogue. In her artworks, she juxtaposes found materials and objects that have social and political resonance with traditional forms of art making and craft, for instance, carving and ceramics. Speaking about how her experience of discrimination in Uganda informs her art, Babirye explains, “Since many call gay people rubbish, I decided to collect the rubbish from dustbins to create something beautiful.”

Babirye studied art at Makerere University in Kampala, Uganda, from 2007 to 2010, and in 2015 she was accepted to participate in the Fire Island Artist Residency. Following the residency, Babirye remained in New York where she is currently seeking asylum with the support of the African Services Committee. Her work was included in numerous international exhibitions: the 2014 Kampala Art Biennale, 2016 Dak’Art Biennale, THINGS FALL APART at the Trapholt Museum in Denmark, and her work is the subject of a feature-length article in the December 2016 issue of Modern Painters.

Graham Durward was in born in Aberdeen, United Kingdom, and currently lives and works in New York. Durward’s paintings incorporate figurative and abstract motifs such as portraits, shrouds, harlequin patterns, and gauzy billows of smoke that explore desire, the human body, and the mutability of images. The diptych painting in this presentation features the celebrated abstract painter, Blinky Palermo, dressed in drag (based on a 1976 photograph). Durward’s gesture of presenting the photograph as a painting brashly asserts Palermo’s identity, persona, and body—otherwise repressed or marginalized by Palermo’s abstract practice.

Daphne Fitzpatrick is a multidisciplinary artist based in Williamsburg, Brooklyn. Fitzpatrick’s photographs, drawings, sculpture, and video are slapstick assemblages of found and altered objects and images that approach gender and sexuality with irreverence and humor. A self-proclaimed flâneur, she collects and transforms quotidian cultural detritus with a highly evolved appreciation of screwball comedy and absurd visual poetry. Included in this presentation are a group of photographic self-portraits from the 1990s featuring Fitzpatrick as a butch, genderless character. Among these are an iconic image of Fitzpatrick in a dramatic film-noir landscape—an itinerant hobo with a barrel strapped to her back.

Fitzpatrick has presented solo exhibitions at American Contemporary, Art in General, and Bellwether Gallery in New York and Know More Games in Brooklyn; group exhibitions include the Contemporary Art Museum Houston, M+B, and Artist Curated Projects in Los Angeles. In 2015, she completed a public commission for a monumental outdoor sculpture at Fisher’s Island, New York. For a decade, she was a faculty member at Yale Sculpture, and since 2016, teaches photography at Bard College.

Eve Fowler is a Los Angeles based artist, curator, and founder of Artist Curated Projects (ACP). Through a range of media from photography, film, printmaking to painting  and sculpture, Fowler explores the convention of portraiture as a documentary, critical, and poetic form to empower marginalized individuals and communities. The series of portraits in this presentation is of male hustlers photographed in New York and Los Angeles in the 1990s. Fowler’s direct, frontal approach to the hustlers prompts the viewer to question his/her own projections and assumptions, creating tension between desire, objectification, and subjectivity.

Richard Haines considers New York City an endless runway. When he first moved to the city to pursue illustration, he instead found a successful career as a fashion designer, working for such brands as Calvin Klein, Perry Ellis, Sean Combs, and Bill Blass. This laid a foundation for his illustration work and after years in the world of fashion design, his career has now come full circle allowing him to emerge as one of today’s most celebrated illustrators. Recent collaborations include Prada and Dries Van Noten.

His sensitive renderings of his subjects, whether they are drag queens, men on the street, friends or fashion models, uncover a deeply sentimental treatment. It is his fascination with the people behind the styles that informs his every stroke, propelling his work beyond mere sketches into the world where art and fashion intersect.

Siobhan Liddell was born in Worksop, England, and lives and works in New York. Through her prolific interdisciplinary practice, she transforms humble materials through simple, poetic gestures with a delicate awareness of creation and experience. Each work is a site of perception and transformation. Included in this presentation is a series of recent photographic collages in which Liddell appropriates images of herself from Nan Goldin’s iconic photographic portraits of her. She responds directly to her history and place within these widely circulated images through tactile interventions that obscure, subvert, and reframe the photographs while empowering the subject.

Liddell’s work has appeared in the 1995 Whitney Biennial in New York, the Yokohama Triennial in Japan, the Musée d’Art Moderne de la Ville de Paris, the Contemporary Arts Museum Houston, and the Henry Moore Institute in Leeds, England. Her work is in the collections of the UCLA Hammer Museum in Los Angeles, the Whitney Museum of American Art in New York, and the Dallas Museum of Art. She is a recipient of the Joan Mitchell Foundation Award and the Rome Prize.

Jimmy Paul moved to New York in the early 1980s, and performed and participated in the East Village club scene. Today, he is recognized as one of the leading hairdressers in the fashion business for his work in shows and magazines like Vogue and W. Nan Goldin’s photographs of Paul are some of her most iconic images. His tender drawings feature angelic androgynous figures rendered in graphite and pastel.

Matt Savitsky is a multidisciplinary performance artist who examines the relationship between performer and audience. Through his use of video, performance, and exhibition design, he formulates a queer optic, which inverts and eroticizes common positions of viewership. He experiments in places with strict boundaries and choreographies—theater, in public, and online—to find new, unexpected combinations between the object and spectator. In doing so, he renews his relationships to a rotation of personal materials, symbols, and collaborators.

Tabboo! is a legendary underground visual artist, drag performer, actor, puppeteer, muse, and singer. A celebrated artist, he performed regularly at the Pyramid Club and in the East Village underground scene. He worked collaboratively in close dialogue with his peers, including Jack Pierson, Mark Morrisroe, Nan Goldin, David Armstrong, and Pat Hearn. Drag is a recurring subject in Tabboo!’s art: he is widely recognized for this drag performances and his iconic ads for the Pyramid Club.

Tabboo!’s design for Deee-Lite’s World Clique album is an iconic image of the early 1990’s music scene. Tabboo! collaborated with Marc Jacobs for Jacobs’s Fall 2016 collection, and his work has been exhibited at Participant Inc, Matthew Marks Gallery, and Paul Kasmin Gallery in New York. In October, a group of his works will be part of an exhibition at the Museum of Modern Art in New York.

Tseng Kwong Chi (born Hong Kong 1950, died New York 1990) was a photographer, performance artist, and downtown New York personality. In the late 1970s, he developed a character and fictionalized persona of a Chinese dignitary or “Ambiguous Ambassador,” complete with the classic Mao Tse-tung suit. Traveling the United States and internationally, he photographed himself at stereotypical tourist sites, such as the Eiffel Tower, Niagara Falls, the Statue of Liberty, and the Grand Canyon, ricocheting between nature and culture to develop an extensive and now-famous series of one hundred silver gelatin self-portraits. The satirical images investigate issues ranging from the nature of tourism and tourist photography, cultural identity, and the clichés of exoticism.

Fred Weston is a self-taught artist who studied fashion design and participated in the club scene in Detroit, before moving to New York to enter the world of art and fashion in the mid 1970s. He is a prolific artist and designer who makes drawings, collages, and photographs. Using his own highly specific systems of organization and categorization, he meticulously cuts, collects, and files photographic clippings in binders and boxes, or uses them in his collages. Over the decades he amassed a vast archive of images related to fashion, the male body, queer subjects, and advertising. His iconic Body Map collages in this presentation are drawings of the human form populated with images of men. Grouped according to his chosen themes or categories, the works explore identity as an individual and collective experience.

Weston’s work has been included in numerous exhibitions and programs with Visual AIDS including panels at La MaMa Gallery and the Whitney Museum of American Art in New York.

David Yarritu is an iconic cultural figure. Since his arrival in New York in the early 1980s, his sensibility has been shaped by decades of work in fashion, art, music, and design; by his time in London as a member of the pop group ABC; and his participation in the New York East Village 1980s art scene, where he performed at the legendary clubs, AREA and the Pyramid. Yarritu is the founder of the Leather Squirrel, a semiannual salon and dance party. He collects vintage queer zines and ephemera, and is currently archiving hundreds of his own Polaroid photographs. In this presentation is a selection of Yarritu’s Polaroids from the 1990s, taken at the original Wigstock festival. Shot with a discerning editorial eye, Yarritu’s portraits capture the glamour, trash, irreverent humor, and genius of his creative community. 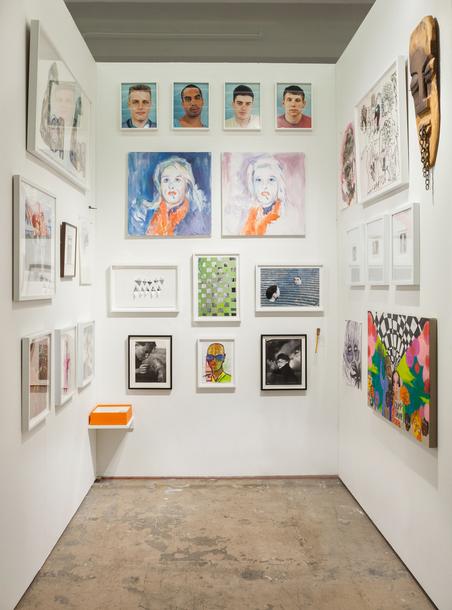 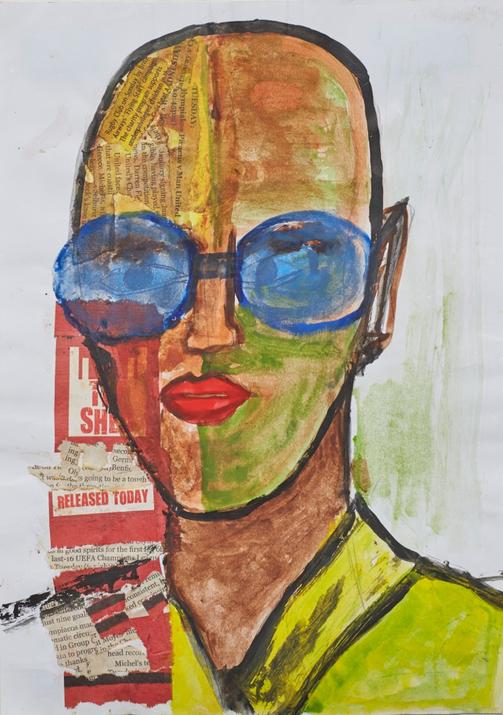 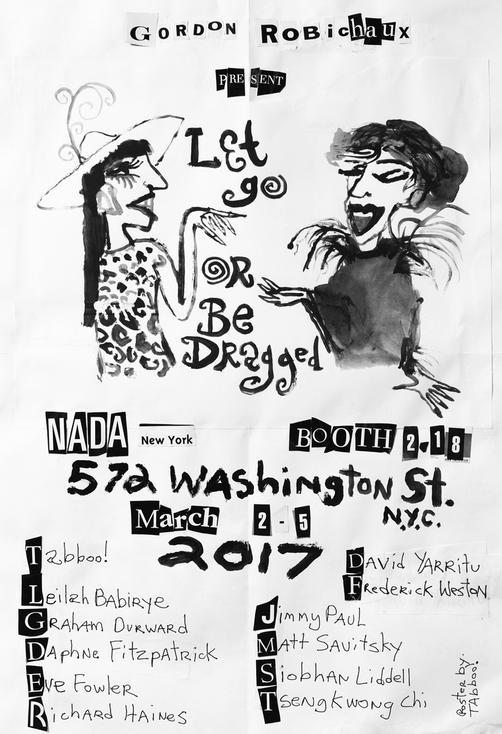 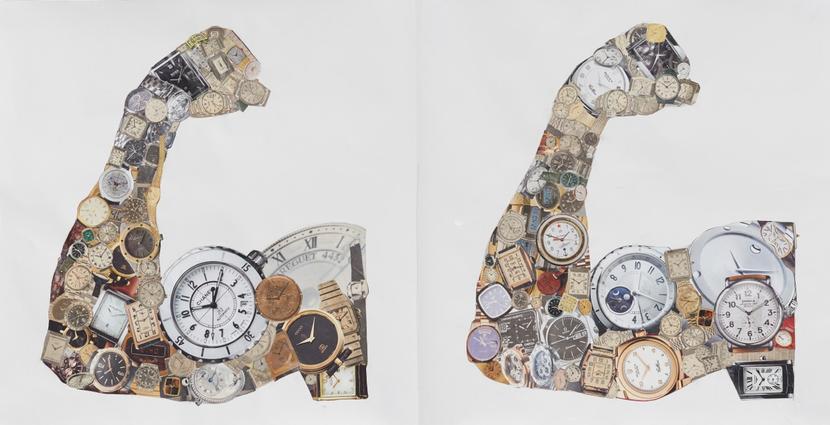