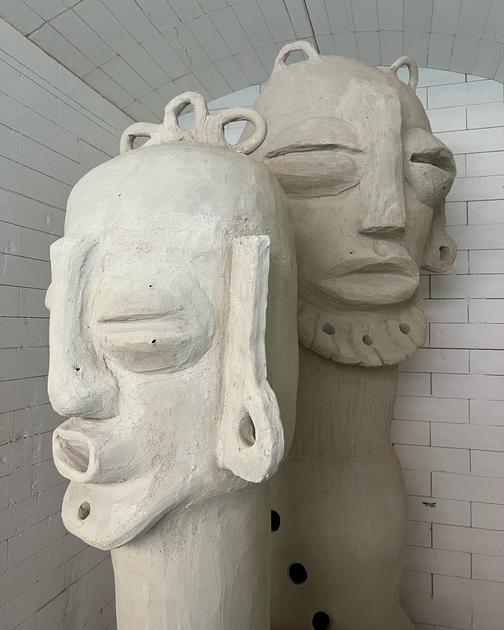 Gordon Robichaux is pleased to present Ebika Bya ba Kuchu mu Buganda (Kuchu Clans of Buganda), a solo exhibition of new ceramic and wood works by Ugandan-born, New York- based artist Leilah Babirye. This is Babirye’s first solo exhibition in Los Angeles and the first in a series of shows presented by Gordon Robichaux at 1464 West Temple Street in Echo Park, Los Angeles. On view are a group of new, large-scale, fired ceramic sculptures—one over eight feet tall—that Babirye created during her residency at the CSULB Center for Contemporary Ceramics (CCC) at California State University, Long Beach. The ceramic figures are bathed in sensual glazes and crowned with elaborate braids of hair, woven from rubber bicycle tire inner tubes. Alongside these ceramic works, Babirye will exhibit a new large-scale wood sculpture—a carved, burned, burnished, and waxed regal figure adorned with welded metal components and flourishes of hammered aluminum.

Babirye was born and raised in Kampala, the capital city of Uganda, in the Lake Victoria region, which is situated in Buganda, one of the most powerful of Uganda’s kingdoms. The Bugandan people feel a sense of pride in their ancestral lineage and traditions, which unify the clans as one interconnected family; members consider themselves siblings however distant their actual birth relation. Because most of the clan titles refer to animals and plants native to Uganda—e.g., buffalo, yam, antelope, crocodile, mushroom, cheetah, grasshopper—Babirye entitles the subjects of her sculptures accordingly—e.g., Naggunju from the Kuchu Mushroom Clan, Nakabazzi from the Kuchu Lion Clan—as a way to honor her background.

Expanding on the existing Bugandan clan system, Babirye imagines and creates her own queer kuchu community. By employing the term kuchu—a “secret word” in the Luganda language used by those in the queer and trans community to address one another—Babirye playfully imagines an alternate queer and trans history unified in its support and protection of its people. Babirye also chooses to append many of the names in the titles of her works with the feminizing prefix Na, queering the culture in which she was raised. The sculptures become stand-ins, as Babirye states, for the “many transgender women, whom we refer to as queens in the kuchu community, who love naming themselves after their favorite aunts, sisters, or women role models.”

Babirye populates her kuchu clans with dignified queer and trans kin, and elevates her subjects as well as the found materials that punctuate her work. Her use of found objects and trash is intentional—the pejorative for a gay person in Luganda is ebisiyaga, which means “sugarcane husk.” “It’s rubbish,” explains Babirye, “the part of the sugarcane you throw out.” The bicycle flourishes refer to her early years in New York as an asylum-seeker, collecting cans and working as a bike messenger. Throughout her work, Babirye brings her rich cultural heritage, activism, and life experiences forward, explicating her view that queer communities “need to make our own history and legacy.” Having fled her native Uganda to seek asylum in the US in the face of threats to her life due to anti-homosexuality discrimination and criminalization, Babirye offers a radical vision of liberation, dignity, and community.

Leilah Babirye (born 1985, Kampala, Uganda) lives and works in Brooklyn, New York. She studied art at Makerere University in Kampala, Uganda (2007–10), and participated in the Fire Island Artist Residency in 2015. In 2018, she received asylum in the US with support from the African Services Committee and the NYC Anti-Violence Project, and presented her first solo exhibition at Gordon Robichaux in New York. Babirye is represented by Gordon Robichaux, New York and Stephen Friedman Gallery, London.

In 2022, Babirye will present monumental, newly commissioned sculptures as part of Black Atlantic, an exhibition co-curated by Hugh Hayden and Public Art Fund Curator Daniel S. Palmer, presented by the Public Art Fund in Brooklyn Bridge Park. Later this year, her work will be included in exhibitions at The Aldrich Contemporary Art Museum in Ridgefield, CT and at mumok, Museum moderner Kunst Stiftung Ludwig Wien in Vienna, Austria.

In 2021, Babirye had her first solo exhibition in London at Stephen Friedman Gallery. In 2020, Babirye’s work was the subject of two solo exhibitions—at Gordon Robichaux in New York and at Rebecca Camacho Presents in San Francisco—and was featured in group exhibitions at Mary Heaton Vorse House in Provincetown, MA; Stephen Friedman Gallery, London; Parker Gallery and Marc Selwyn Fine Art, Los Angeles; and in the Public Art Fund’s Art on the Grid, installed throughout New York City.

Babirye has participated in numerous panel discussions, including at NYU’s Tisch School of the Arts (organized by JD Samson); Yorkshire Sculpture International; The Africa Center; the 1-54 Contemporary African Art Fair; and the Black Lesbian Conference at Barnard College in New York.

Thank you to Ryan Conder, Tony Marsh, Chris Miles, and the CSULB Center for Contemporary Ceramics (CCC) at California State University, Long Beach for their support.